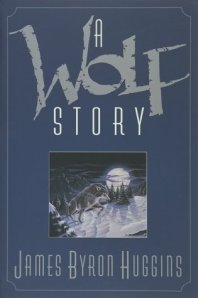 A Wolf Story by James Byron Huggins is one of the most influential books in my life.  It is unabashed Christian fiction that lies on the razor’s edge between allegory (Pilgrim’s Progress) and animal adventure (White Fang meets Watership Down).  I have read four copies of this book to pieces in seven years of outdoor ministries, and I firmly believe that every boy should be issued a copy of this book at puberty.  Anyone mature enough not to care whether they’re reading young adult fiction should read it anyway.  I have never been able to hang onto a single copy for more than six months because I give my copies away to young men and old whose hearts I want to kindle with a passion to be strong and fierce for God.  Yes, the animals talk, but everyone who ever dreamed of having a warrior’s heart for God should read what they have to say.  When I worked for a Christian bookstore we couldn’t keep the book in stock because I couldn’t stop recommending it.  This book has influenced my writing, and my life.  I’m not unaware of the irony that a book without a single human character is part of my definition of manhood, but that’s exactly what this book is.

Huggins is the real deal, an award-winning journalist who left the print business to run what amounts to Christian espionage behind the iron curtain, supporting the faith in dark times of persecution.  I don’t love every book he’s ever written, but this won’t be the last book I review on Lagrandil.com.

In terms of style this book is an opera.  Everything in it is bright and bold from the very first sentence (which I will quote here from memory since I have read it out loud hundreds of times.)  “Saul sensed death on the wind, and turned to face his enemy.”  This is no Disney story.  If you animated it, young children would have nightmares.   It begins with a vicious attack of a demonic wolf against a colony of wild hares.  Blood flies as the opening characters put their love of family and their hope in God into action with fang and claw.  This is a story of mortal combat in dark places, laying down your life for the powerless, sacrificing everything you’ve got when you trust that God has your back.  It is the story of pressing on to your goal despite mortal wounds.  Huggins borrows names of famous heroes from Western tradition and the Christian faith.  The action has all of the thrilling hallmarks that kept me reading Jack London through cold winter nights on my parents’ farm.

This book is not for the self-appointed intellectual.  The Gospel is paraphrased, but it isn’t gratuitous.  If you had hours before a killer got to your family, and you had time to tell them one last thing, I only hope I could be the sort of man who tells them the Gospel one more time, and spend my last speech upholding my family before the Lord.  It is a book about a father’s love, the fierce love that makes the hardest sacrifice of all: to let his son go and become a man even if it would get him killed, because to do otherwise would worse than kill him.

The book would be much the worse if it were only the story of unbeatable heroes for Jesus.  It’s far from that.  King Saul of the hare colony has no chance to defeat the wolf that’s come for his family, but he defeats Incomel in so many ways.  Young Aramis the wolf comes to adulthood in the novel, and it is almost always a situation beyond his strength and ability that constantly drives him to a growing faith.  He’s no super-wolf.  He is afraid, alone, and wracked with doubts.  When he overcomes these, then he faces ever greater challenges in the greatest tradition of operatic stories (Star Wars, for example).

Huggins’ supporting characters are a delight, from Windgate the hare hero to Gianavel, king of the wolves.  His villains creep from the darkness with glowing eyes and fangs dripping malice.  If you are looking for self-conscious literature, look elsewhere.  If there is something in you that still stirs to the call to be strong and courageous before the Lord, to conquer your fears, to find your strength in dark times, and if you can handle a battle between talking animals if it tells you a deeper truth, then this novel is for you.

I appreciate Huggins’ wolf-opera even more after reading his other books.  He’s no hack writer who can only paint in neon shades of the heart.  He writes action adventures to be sure, but he’s as capable of writing straight copy as he is writing action-drama like this.  But he brings those skills to deliberate focus in his choice to write bold stories.

I believe that this book, along with Ender’s Game and the Bible, should be issued to every soldier, airman, marine, sailor, and teenage guy in America.  Don’t know what else I can say beyond that.